BEGIN TYPING YOUR SEARCH ABOVE AND PRESS RETURN TO SEARCH. PRESS ESC TO CANCEL
Skip to content 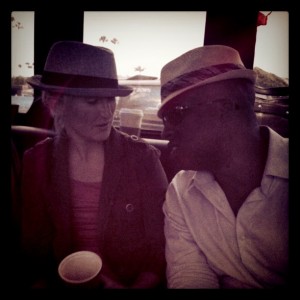 “You see baby, I think I’m faster than you.”

“You see baby, I think you’re full of crap.”  I was sitting on a party bus attempting to talk over a screaming Brittany Spears while keeping the hem of my neon pink dress at a moderately acceptable level, and failing at both.  Red plastic cups littered the landscape, and their contents—charcoal filtered vodka and orange juice from concentrate, no ice—had left their sticky mark on everyone’s clothing.   It was Opening Day at the Del Mar Racetrack; gotta love it.

“Yea, like 10 years ago.”  He was legitimately carrying a quarter of my body weight around his midsection.

“No, baby, but that muscle never goes away.”  You’re right.  It just hides.

“No offense—really, I mean that—but when was the last time you ran?  And I mean, really ran.  Not like, after a taxi or your girlfriend’s car after she dumped you, but actually-“

“Oh, that’s so cute; you want to know if I have a girlfriend.”  Really?  That’s what you got from that?

“Um, no.  I actually don’t really care either way; I was just trying to make a point.”

“That I am faster than you are.”

“Aw, come on now,” he squeezed my knee so hard it made me jump; “you don’t really believe that.”

“I will beat you in a 100 yard dash right now wearing my heels and without spilling my drink.”  Screw you and the horse you rode in on.

From the look on his face, I couldn’t tell if he wanted to take me home or push me from the moving bus.

You see, I didn’t know Brandon.  At least, not really.  I had let him pick me up at the racetrack, which is, for the uninitiated, a circus of alcohol, silicone, and spandex, and I did it for my friends.  When we first met, he was talking to my friend Julia, so I assumed that they knew each other (because why else would a male and female be talking?), and he quickly made his interest clear.  I did not return this interest but judging from his suit and swagger, I figured that if I played along, I could at the very least get my friends and me some free cocktails.  And before you judge, the lines were long and his opening line was, “You’re an athlete aren’t you?”  He had it coming.

Being a good wing woman or man is an art.  You have to display just enough interest to facilitate whatever situation is at hand, but not so much that the subject thinks they’re actually going to get lucky.  As you will see, this is an art I have yet to master.

I was able to keep the conversation light enough at the track and finagled a ride for my friends and me on his party bus out of the parking lot (a trip that would have taken us at least two hours walking).  But once we got onto the bus, things got serious.  There were hands on the knee, suggestive leaning, pictures were taken—I tried to keep the contact causal by dodging and weaving, and even tried to start a fight, but it all just poured fuel on the fire.

“You hear this girl?”  He said to an attractive guy I would rather be talking to, “She thinks she can beat me.  She’s spicy.  I like that.  Mmmhhmm, you gotta know what you like.”  Ew.

“So, what’s your name?”  I asked the tall, athletic, and smirking gentleman in an attempt to change the subject.

“So, Ryder, what do you-“ my voice faded into Rhianna as Ryder gave Brandon one of those secret “bro” handshakes and went and sat down next to my friend.  It was official, I had been peed on.  In my attempt to facilitate a fun time for my friends and me, I had made a terrible oversight—I had allowed my contact with Brandon to go too far and now he thought I was interested.  Great.

I looked out the window at the herd of buses and cars jostling for space in the choked exodus out of the parking lot and considered my options.  I could tell my friends, “party time’s over; we’re walking,” and make them disembark into the sea of exhaust and people, or I could suck it up and continue my boxer’s shuffle for the 30 minutes it would take us to get out of there.  Despite my urge to make an action hero’s leap from the bus, I gritted my teeth, gave Brandon the most authentic fake smile I could muster, and pretended to listen to his detailed account of high school baseball.  Vomit.

My face was all interest, but the second his hand came anywhere near my knee, I was up and dancing, I was chatting up his boss’s wife (really, who brings three random girls on a party bus with coworkers?), or I was refilling cocktails.  All of this bobbing and weaving resulted in the inevitable question:

No, punk.  I just don’t like you.  And I would be talking to the other guys on the bus if you hadn’t made it so glaringly clear that I was “yours”.  Tension was building; we needed to GO.  Luckily, the driver asked where we wanted to be dropped off just as the bus hummed through Cardiff.

“Here’s good!”  I yelled, a little too enthusiastically.

My two friends and I leapt from the bus and started walking to the nearest bar when we heard a, “Hey!  Where you guys headed?!”

I turned to see Brandon lumbering toward us in all his lavender splendor, along with Ryder and another very inebriated dude from their crew.  Seriously?  You just asked me if I like girls.

“Let’s get some cocktails!”

Yes, that’s a good idea.  More alcohol will definitely make me forget how much I don’t like you.

Brandon went to the ATM machine; made sure I saw him take out an obscene amount of cash and proceeded to buy cocktails not only for us, but also for the white-haired, yellow-toothed men that hang out in dive bars on weekdays.

Now, I like to facilitate a good time for my friends, and believe me, they were having a good time, but this was getting ridiculous.  So I started to get mean.  And this brings me to an interesting discovery—the meaner you are, the more guys like you.  It’s sad.

I would say things like, “You think you’re a really big deal, don’t you?”  And, “You should probably start with one of the easier trails at Torrey Pines.”  I even made fun of the pit stains on his shirt.  But all he would ever do is smile and say, “I like you.”

Seriously?  Do you have the ego of steel?

When he leaned over me, closed his eyes and puckered his huge lips like a five year old, I hit my wall.  Even one of the old men at the bar recognized my disgust.

“Hey buddy, I think she’s serious.  I don’t think she likes you.”

Normally when I need to exit a situation like this, I would just say I need to go the bathroom and pull an Irish exit.  But the bar wasn’t crowded, it was on a stretch of road not frequented by cabs and I had to two friends to think about, so I was going to have to launch a frontal attack.

“Nope.  See you later.  Girls, we’re leaving.”  I had the bartender call us a cab and walked outside to sit on a bench and wait.

“Wha-what happened?  I’m sorry!  I-I’ve just been drinking.”  Apparently my acting skills are in good shape because Brandon actually thought I was upset he forgot my name.

I actually felt bad as the cab drove away because he looked like a kid who was just told there’s no Santa Claus, but really, he should have picked up on the clues earlier.  If you lean, and the girl doesn’t lean with you, she’s not interested.  And no amount of drinks, knee squeezes or playful, yet demeaning commentary, is going to change that.