BEGIN TYPING YOUR SEARCH ABOVE AND PRESS RETURN TO SEARCH. PRESS ESC TO CANCEL
Skip to content

I know this epiphany won’t come as a complete surprise but: all athletes and sports fans are weird.

The marathons runners who pee or poop themselves midrace, the football fans who display jiggling and painted bellies in sub-zero temperatures, anyone who plays or watches cricket—every one of them is a strange bird that should be sequestered and studied for the duration of its life.  I can say this because I grew up in a household where fall Sundays were sacred (not because we were going to church) and I’ve either played sports or been an endurance athlete since elementary school.

I thought that I’d seen or heard just about everything until recently, when the boyfriend introduced me to a new kind of athlete: the UFC fighter.  Not surprisingly, I hate everything about this sport—the blood, the missing teeth (of the fans), and the emptiness in the fighters’ eyes after they’ve been pummeled for three rounds, it’s all too much for me.

But I do find the setup a bit ironic.

Here you have two brutes, the most alpha of alpha males, who have spent the majority of the previous 7-10 years turning their bodies into lethal fighting machines so they can square off against each other, in a cage, wearing little more than a loin cloth.  Then these physical specimens spend the next nine minutes trying to straddle the other.  In fact, I’m pretty sure the guy with his crotch closest to the other guy’s face, wins.

I’d be willing to bet that the majority of these fighters are actually gay but are too macho to admit it, so instead of just moving to San Francisco and calling it a day, they get as close as they can to sweaty, half-naked men, and wrestle them to floor.  Then as soon as they start to get aroused, they pound away at their faces as if to squash latent sexual desires.

Or maybe they just have anger issues. 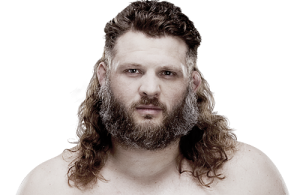 They don’t make gays in his neck of the woods– they make moonshine and gator kabobs.  Only they don’t call them kabobs, because that isn’t “Amuuurican” enough.

When this portly “athlete” stepped into the ring on Saturday night, I almost laughed.  He had a mullet and a beer gut that would make John Belushi proud, and the first thing I thought was, “Well, at least he can relate to his fans.”  What made it better was that his opponent, Dave Herman, is a bronzed Adonis who should be modeling for Abercrombie and Fitch. 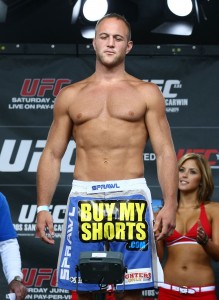 In fact, I’m pretty sure when he walked out, every girl in the place took off their panties and tried to throw them at him.  Just look at the chick standing behind him in this picture– those eyes say, “I am going to sleep with you tonight.”

I watched him de-robe and receive Vaseline across his brow and I couldn’t help but be thoroughly confused; why was this gorgeous creature vying for the opportunity to make mince meat out of his face, when he could be using it make a very comfortable (and less dangerous) living.

Was he abused as a child?  Had no one told him he was beautiful?  Was he the ugly duckling that turned into a swan without realizing it?

I felt compelled to call and tell him that there were other options.  But what would I say?  Probably the same thing a bleeding hearted pervert says when he tries to save the stripper giving him a lap dance.

“You don’t have to do this,” the conversation goes, “you’re beautiful!  There are other ways to make money.”

Only thing is, male models are basically prostitutes these days (I’m pretty sure queenie photographers still demand a BJ or two before booking), so that wouldn’t really solve the whole latent homosexuality thing.  Or maybe it would?

In case any of you are wondering, this is exactly what I was thinking about when the bell rang and the fight started.  And then I quickly became very concerned about The Beauty Queen’s future in modeling.

Luckily the fight started mildly enough as he and the Mullet Man danced around each other like they were two peacocks trying to mate.  Occasionally, one would throw a punch and the other would respond with a kick, neither would do much damage and I’d be willing to bet the guys in the room were exceptionally bored.  I, however, was relieved, because every time a pale pudgy arm came flying near the golden boy’s head, I braced for the worst.

“Not the face!” I wanted to scream, “Anywhere but the face!”  I just didn’t want to see The Beauty Queen all torn up with cuts and cauliflower ear—some things should be preserved.

It looked like we were going to get out of the round without too much damage until the beauty revealed his lack of brains.  He got too close to the crazy trucker and with one punch that came down like a hammer; White Trash USA won the fight.

The whole night, I hadn’t seen anything like it.  All of the other winners had had to jab, kick and wrestle their opponents to the ground before they submitted while drowning in a puddle of their own blood.

Not this beer gut.  One punch and the future model’s body went limp and fell to the ground.  He got up without so much as a bruise on his face, but the ref called the fight anyways.  He must have been just as concerned about The Beauty Queen’s career options.

I relaxed a little as the next two athletes started their dance through the blood and sweat dropped by their predecessors (apparently cleaning the ring between fights would be too civilized), but I had to wonder how any fighter or audience member got through an entire night without throwing up.

The smell of the blood and sweat alone would be enough to trigger a gag reflex, and then you have to spend hours watching two humans bathe in each other’s bodily fluids.  Or, if you’re a fighter, the best you can hope for is to end the night slicked with someone else’s epithelials.  Gross.

Of all the things we’ve cooked up as entertainment, and I’m counting shows like “The Jersey Shore” in this assessment, UFC fighting is the weirdest.  It is the basest, most primal of contests that disproves all theories of evolution.  I just don’t get the draw.